As the world stares in shock at COVID catastrophe engulfing my country, horror hits hard 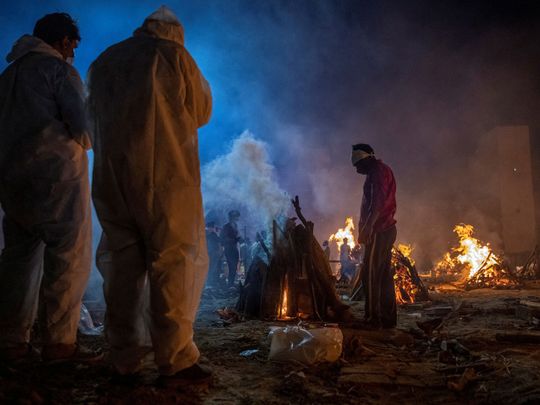 People cremate bodies of victims of coronavirus at a crematorium in New Delhi, India

As I write this I am completely numb. As an old fashioned journalist, I like to tell the story, not make it about me. Despite the cynical armour of an investigative journalist what I have seen in Delhi has broken me.

New born babies, some two days old, their tiny unformed bodies shuddering as ventilators jolt them to live and breath. An old couple, both suffering from COVID-19 — the man dying, his corpse smelling and no one comes as the frantic wife calls and calls.

Grief and cries in India’s capital — so many cries that they sear in to your being finally leaving you numb, the pain a palpable taste like the one you taste of disinfectant when you enter a hospital.

Some of the country’s biggest hospitals and doctors begging via social media for oxygen. Read that once again slowly. Doctors not busy in tending to the avalanche of patients but begging the government for oxygen.

A nation in panic

And, the government reacting — by asking Twitter to pull down critical tweets. Not address the reasons for the criticism but, shooting the messenger.

The usual black market which is an Indian reality, kicking in even for cremations. Did I mention cremations? The dead being denied dignity in mass cremations. Their families denied a chance to bid a last goodbye.

Where does one begin? And, where does one end? As the world stares in shock and horror at the COVID-19 catastrophe engulfing my beloved country, the horror hits hard — a blow to the solar plexus that leaves you reeling.

Government’s response to the second wave of COVID-19 and the lackadaisical policy on differential vaccine pricing will now define India for years to come.

The official response has been non-existent, marked only by a smug sense of public relations. A few months ago India’s ruling BJP passed a resolution thanking the prime minister, Narendra Modi for defeating Coronavirus. India had defeated the virus, it was declared, added capacity and was helping the world.

The irony makes you squirm. Two other things defined the government response. Allowing the Maha Kumbh, in fact advancing it by one year for “astrological reasons” and the festival of public meetings held by all parties in the assembly elections. Modi, as the prime minister, could have led by example but he didn’t.

After the oxygen crisis blew up in India’s face, the prime minister cancelled the last day of his public meetings in West Bengal and did one virtual meeting where a large non-virtual crowd heard him in Bengal.

We have always aspired to be a super power and it is an excellent quest but which wannabe super power lets a crisis of oxygen shortage fester unaddressed for five days? So much for those pretensions.

After the surreal battle for oxygen fought by desperate states, government let another battle fester — the battle for vaccines. First the centre incredibly made a single order for vaccines, then came up with bureaucratic classifications of who could have the jab and who had to wait. This long and lengthy process allowed the virus enough time to cut a swathe. As the problem exploded, India celebrated “vaccine Utsav” (vaccine festival).

Now it is a mess of differential pricing. Yes we can’t handle oxygen supplies but poor Indian states — with already taxed resources to the maximum — will have to pay more than the centre for vaccines as the buck has been passed on to them.

No other democracy has put the burden of paying for the vaccines on the citizens. US and the UK are two obvious examples. Free mass vaccination is the only way to fight the pandemic. Yet this simple reality eludes our policymakers.

The poor — and there is a vast number of them — will be the victims as they nearly always are in every India story.

The billionaires who offer sycophantic public support to the establishment have already winged their way out of India in their private jets just in time for summer in London — their normal routine. A pandemic does not come in the way of a billionaire and his summer plans.

The ticking time bombs of additional COVID-19 numbers of the Kumbh and public meetings will soon come back to roost in the interiors of India.

Sadly no lessons have been learnt and the political class is numb to the suffering of COVID-19 struck Indians.